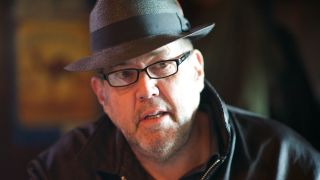 The Stacks
Alex Belth
—-
Hard to imagine having a cooler job than the one Gregg Sutter had for more than 30 years, when he served as the late Elmore Leonard’s researcher. Sutter is the editor of the Library of America’s Elmore Leonard anthology, which will be released in three volumes, the first of which was published a few weeks ago (volume two comes next year, volume three in 2016). The first volume features Leonard’s early Detroit crime novels—Fifty-Two Pick Up, Swag, Unknown Man No. 89, and The Switch. I recently had the chance to talk to Sutter about the great Dutch Leonard. Dig in.